One hundred thirty poverty-stricken children around the world will receive a shoebox filled with fun gifts, school supplies, and hygiene items, thanks to Glen Mar’s participation this year in Operation Christmas Child (OCC) – a ministry of Samaritan’s Purse, a nondenominational evangelical Christian organization. Samaritan’s Purse has collected filled shoeboxes since 1993 and given them to 188 million children in 160 countries.

“This is a great project for families to do because children can choose gifts for a child their age and help pack the box, so it connects them to a child somewhere else who maybe has never gotten a gift before,” noted Minister for Middle School Youth Jen Rowell, who led Glen Mar’s OCC project this year.

Nine middle schoolers and five adults met at Glen Mar on November 14 to assemble an additional 65 shoeboxes. Items for these shoeboxes were made at one of two events: Glen Mar’s annual Day of Service in January where volunteers serve the needs of the community or during our church’s Local Mission Week last June when volunteers crafted gift items because their mission projects were rained out. 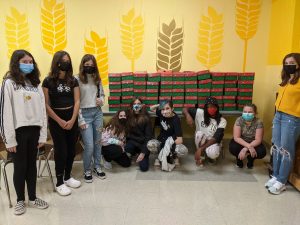 “We do a packing night with the middle school youth because it’s a fun and active service project for them, and we get a chance to teach them about evangelism and the cool ways God can use what appears to be a random assortment of gifts,” observed Jen.

Other Glen Mar folks donated money to cover the $9 per box shipping and other project costs.

Completed boxes were transported to processing centers around the country the third week in November. This year, Glen Mar’s boxes were delivered to Edgemere, Maryland, for processing.

Glen Mar has participated in OCC since 2008 or earlier, according to Eloise Labram, who has been active in this ministry since at least 2004. “I continue to participate because this ministry tells children around the world that Jesus loves them. Sometimes it’s the first gift they ever received,” said Eloise.

In addition to receiving filled shoeboxes, children in many places get a copy of The Greatest Gift, a storybook Samaritan’s Purse developed. It shares the message of salvation in a child’s own language. Some shoebox recipients are also invited to take part in The Greatest Journey, a 12-lesson discipleship program led by trained volunteer pastors and community leaders. Through The Greatest Journey participation, children not only grow in Christ themselves but share the Gospel with others.