Ronn McFarlane is returning to Glen Mar, the church he attended in his youth and the house of God 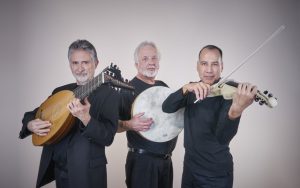 that his parents, the late W. Lee and Mary McFarlane, helped found. McFarlane is coming to play the lute. And he’ll do it as a member of the progressive folk trio Ayreheart that he founded in 2010.

Ayreheart will hit the Spirit Center stage on Friday, August 12, 2022, at 7:00 pm for a one-hour performance. This event in Glen Mar’s Summer Concert Series is free.

Ayreheart will play Renaissance and Celtic music, but combine it with original music that McFarlane wrote. Ayreheart’s rock and jazz backgrounds will come through in the trio’s energetic performances.

Since McFarlane left Glen Mar at the age of 17 to attend college, he has become known for taking the lute, the most popular instrument during the Renaissance, and bringing it into today’s mainstream music. McFarlane has performed throughout the United States, Canada, and Europe; made more than 35 musical recordings; and earned a Grammy nomination for Best Classical Crossover Album.

Percussionist Mattias Rucht started playing the drums at the age of 12 and has been active playing percussion for rock, jazz, folk, and world ensembles in the Washington, D.C. area for more than 25 years.

Willard Morris has played bass, violin, mandolin, piano, guitar, saxophone, flute, and banjo before learning how to play the colascione to enhance Ayreheart’s performances. The colascione is a bass cousin of the lute.

No childcare will not be available at this concert, but children are welcome. 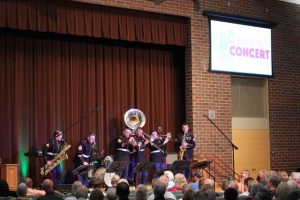 The Jazz Combo got the action started by performing numerous songs, including “Isn’t She Lovely.” When the Brass Band energetically marched into the Spirit Center, they further pumped up the crowd with favorites like “When the Saints Go Marching In” and “I’ll Fly Away.”

The audience appreciated the musicians’ enthusiasm and musicianship. 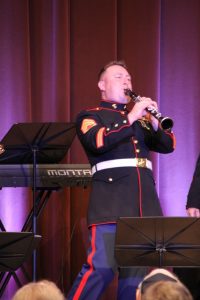 “I loved it,” commented Jackie Mueller from Damascus, who added that she was glad she could expose her daughters, ages 13 and 7, to good music.

“The singers and instrumentalists were fabulous. They were so energetic that you couldn’t help but feel uplifted,” commented Catonsville resident Richard Henkel. “The performers enjoyed themselves and took their audience with them,” added Richard’s wife, Glenda Henkel.

“Everybody was so perfect in their timing,” praised Charlie Borcherding, a professional pianist. “Service bands are the best of the best. I love their enthusiasm.”

The Summer Concert Series is most grateful to the Howard County Arts Council for its $4,000 grant for the 2022 season and to Harry H. Witzke’s Family Funeral Home for its 2022 sponsorship. Appreciation is also extended to the ”Friends of the Music Program at Glen Mar Church” for their donation and to the donation made in memory of Karen Angle.